First day of the my last year at bread and pastry school.

And I’ve decided I don’t like my new teacher, Mr. Miller. A man past sixty, rather thin but very tall, stiff and walks with measured steps. If one can drown in his bright, blue eyes, he will find out soon enough that you can get scorched with Mister Miller’s cold, black humour. On this first day, I was his target – the worst nightmare of students nearing their fifties, reprimanded by a teacher who truly belonged to the old school. I wouldn’t have been surprised if he had carried a stick.  Though it’s hard to admit, it was entirely my fault to have caught his stern reprimanding – “no nailpolish,” he  said. I knew, but I took the risk anyway having misgivings of dissolving what I paid twenty euros two days ago so I could look my best during a presidential visit. “I’ve never painted my nails in class nor in my kitchen,” I started to explain but he cut me off, “don’t say never because you obviously did today,” but I countered with “what I meant was, before today.” He gave me a hard stare, rolled his eyes and then looked away. I stood there open-mouthed and heavily embarassed infront of the class.

Then, he saw my earrings. He let out a long sigh and launched what will be a series of mini-lectures that day. “Why do you wear those things? It’s metal and nail polish is toxic. Why can’t you just be yourself instead of appearances,” all said in a monotone which leaves you guessing whether he was being funny or trying to impress us on the first day of school. I would be subjected to a number of not-so-innocent verbal jabs the whole afternoon till evening that at the end, nothing sounded funny. I was feeling hurt and humiliated and tears of anger threatened to humiliate me further.  I started to corner one classmate after another, lamenting this impolite treatment and vowed to unleash the bitch in me if he repeated the earring and nail polish story the fifth time. I am very aware of my transgression of  school rules but it’s none of his business if I want to die from nail gels and appear superficial with culturally-rooted ear piercing that I received at birth.

He has killed my gay self and scorned the smile that won me the title of “Teacher’s pet” all these four years. My charm has lost its power on the man who would make a difference in my baking career.

He didn’t notice my tension like the rising dough increasing in volume nor the faint appearance of my claws as he began a solemn speech on breadmaking. If his earlier remarks sounded like an opening prayer to hell, his first lessons turned out to be like manna from heaven. This is what we had hoped to hear from day one of bread and pastry school – an honest understanding of baking as a vocation, of a profession that one can keep if practiced with love and passion. The class was quiet like a flock of sheep in silent admiration and ready to be led by a hand that would transform flour, water, yeast and salt into delicious loaves of bread.

Mister Miller is THE baker (still mean, though).

No additives, no preservatives, very little yeast if possible, patience, silence….this is what long fermentation and artisan baking is all about. This sorts of describes the man, too. He grows his own fruits and vegetables, never goes to the restaurant because he wants to know what he eats, he raises chickens to lay his breakfast eggs, he hates summer and the heat it brings, he thinks that a smart phone makes one dull, he never went to a discotheque and he gets tired with giggling girls like me.

“You have to feel the dough, listen to the sound it makes on the walls of the mixer to get a clue to its readiness, let it rest, let it grow…be gentle, no stress, no rush.” Then, he goes on to explain that a good baker is an acute weatherman, a bad one a timekeeper; that butter gives the flavour but has to be added only when gluten has formed; that keeping the speed of an industrial mixer at level one prevents oxidation; and most importantly, that rolling dough into a baguette is not a battle of muscles but a gentle movement of the hands from center to sides as if one is about to spread his wings.

Mister Miller is the best teacher (could be mean, sometimes).

No matter how ironic, cynical and grouchy he can be, Mister Miller is so far, my best teacher. It’s a pity that we have him on the last year, when we now question the lessons of the past years. During the first three years, we were taught to become businessmen – profitability, economies of scale, industrial products that would save us time and money, fancy recipes to attract consumers, etc. Mister Miller is simply teaching us to become bakers and promises that artisan baking – even considering the extra amount of time we spend in making breads and pastries – can still be profitable because there are people out there who want honest-to-goodness bread and not some frozen dough made from industrial bread mixes.

From that day on, I vowed to buy bread (if I cannot make it) only from artisan bakeries. That’s my little contribution to the profession that Mister Miller has devoted his life to but fears that one day will go stale. 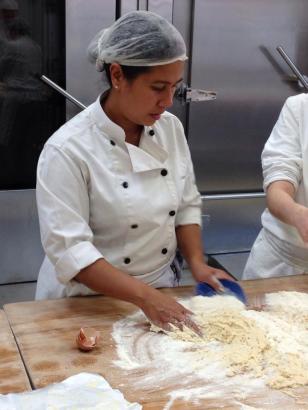 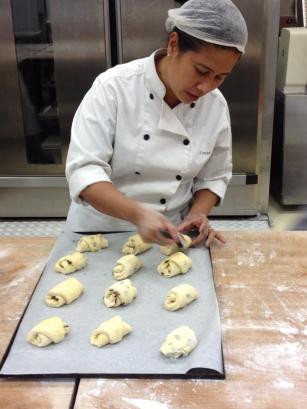 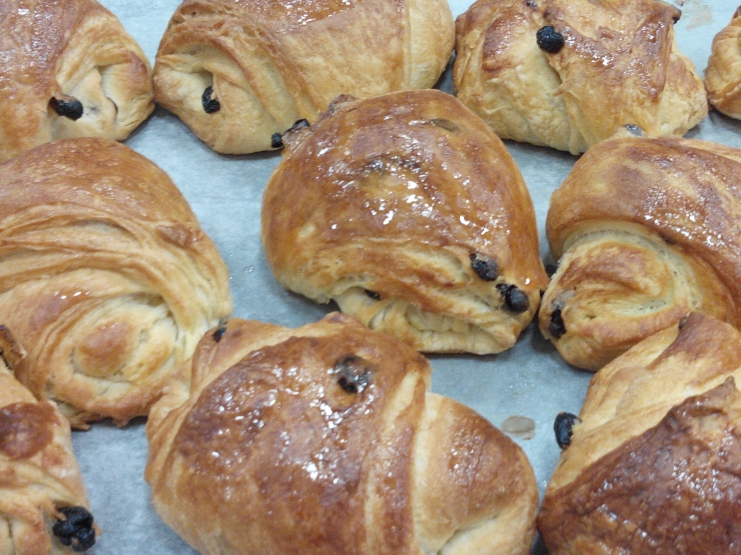