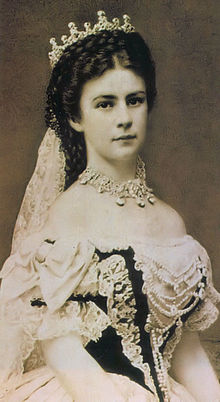 gilded carrriage stopped infront of the famous tea shop on Vorosmarty Square in Pest. She gave quick instructions to her lady-in-waiting to buy tea from China, liquor-soaked cherries covered in chocolate, and the twelve-layer Dobos Cake which would be wrapped in the newly-invented paper tray for take-aways. This was the late 1800s and the fastidious client was no other than Empress Sissy of the Austro-Hungarian empire.  She feared the winds would blow her hair off their ten thousand pins and the three-hour coiffure would have gone to waste.  And this was so unlike her – indulging in sweets when her number one obsession was weight control. Memoirs have talked about secret binge eating but not as much as her excessive penchant for keeping her weight at fifty kilos, the weight she maintained despite of four pregnancies and which would keep her extremely slender with a teeny-weeny waist, accentuated by the tight lacing of her Parisian-made leather corsets. She was so obsessed with her weight that sometimes her diet consisted only of milk and eggs or endure a “hunger cure” for days.  She also had an extreme and rigorous exercise regime, riding horses for long hours and installing balance beams  in her bedroom. Not to mention her strange, original and mysterious beauty rituals – special shampoos made with eggs and cognac, crushed strawberries for facial masks, or olive oil for evening baths.

It was one of those days when she had a certain longing for sweets, especially for the delicious cake that she had the honor of being the first to taste when Hungarian chef József C. Dobos presented it during the National General Exhibition of Budapest in 1885.

But if she had stepped down from her carriage that windy day, she would have bumped into the ailing, gray haired Franz Liszt who had just finished a cup of coffee and three sheets of musical notations. And the rest of Hungary’s elite would have graciously bowed before her presence at the famous Gerbeaud Café.

For Gerbeaud Café, then and today, remains the place to be seen and is considered as one of the best pastry shops in the world. Like the rest of Budapest architecture (museums, government buildings, theaters, thermal baths, etc.), this old-world café has maintained its opulence and elegance despite of wars, change of owners, change of address.  And I’m rushing to get there before it closes for the day.

So, I huff and puff along the chain bridge, after a hike and a stiff mount to the hills of Buda to visit the Empress’ summer castle. (A view of the Parliament Building along the Danube river, taken from one of the windows of the summer castle). 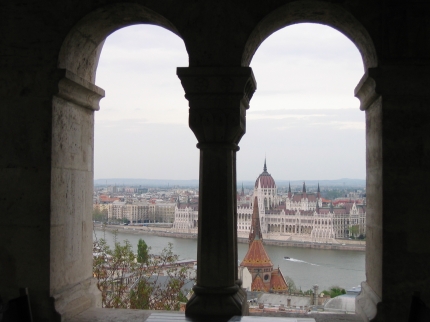 We simply avoided the funicular which links the Buda Castle to Adam Clark Square. I have to shed off calories before indulging into one of the world’s most celebrated cakes, the Dobos Torte at Gerbeaud Café. Many reviews  have marked this place as fancy, pricey and touristy. But who cares? I am a tourist anyway and let’s pay the price of a pricey cake another day. The Dobos Torte is a series of very thin sponge cakes and chocolate  buttercream, topped with a caramel to keep it moist for days. The number of layers could vary from five to seven but the more enthusiastic chefs make twelve layers, which make one slice good for two. So, I’m sitting in this grand coffee and tea shop with marble table tops, rococo ceilings, exotic wood panelings, velvet curtains, and Bohemian crystal chandeliers named after another empress of Austria, Maria Theresa…and impatiently waiting for my Dobos cake to arrive.

What made the Dobos cake so popular at that time was the introduction of buttercream, replacing the traditional pastry cream and whipped cream as fillings. Dobos kept the recipe until he retired in 1906 and since then, has been made available by the Budapest Confectioners’ and Gingerbread Makers’ Chamber of Industry. The other best-known address for Dobos cake is Daubner, a little bit outside of the city center but we took the wrong bus, went down on the wrong station, made a wrong turn on the right street and by the time we arrived, the shop was closed. The storefront, however, paled in comparison to the stucco exterior finish of Gerbeaud.

The man behind this shop is Henrik Kugler, a third generation confectioner, whose travels all over Europe influenced his menu when he opened the confectionary at the original site on Jozsef Nador square. He became known for the  “the best ice cream in Pest.” The name Gerbeaud, however,  is that of his Swiss associate Emil, whom he met during one of these travels and who for many years, retained the name Kugler as the shop’s name. Gerbeaud would see to the expansion and techological revolution of the kitchens. He also hired more staff, created exquisite packaging and invented new confectionaries.  The success of Gerbeaud continued until the middle of the 20th century but started to decline during the communist era and almost lost its glory under foreign owners. Fortunately, its former grandeur has been brought back by a local company, the Hungarian Gasztronómia. They have even opened a pub and now runs a Michelin star gastronomic restaurant, Onyx. I did not dare eat in that one after reading a review which said “very expensive.” So, I just sat there among the snooty tourists, enjoying the strains of  a sonata by Liszt, paying hommage to Monsieur Gerbeaud by tasting his “legacy,” “a chocolate and almond marzipan sponge delicacy with cognac-soaked cherries” while writing three pages of fiction that tells the story of a vain Empress who gobbled a twelve-layer cake during an imaginary stop-over in the heart of Budapest. 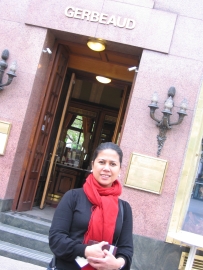