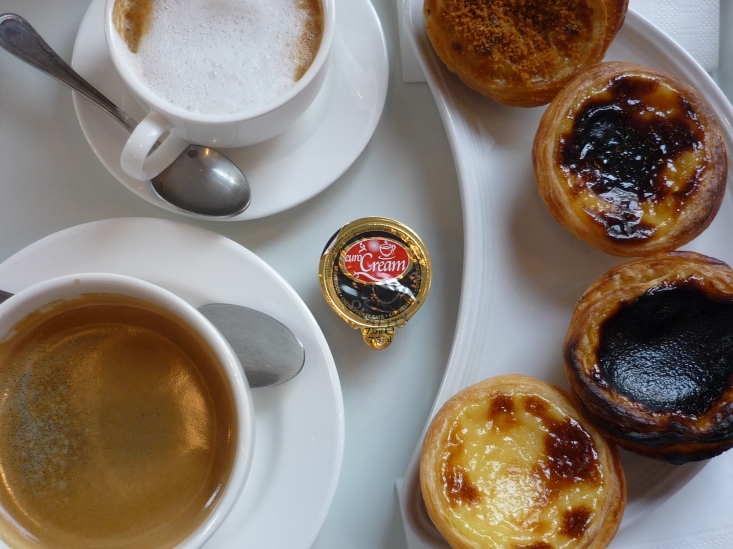 I have finished this piece a week ago, starting with…

Joaquim Miguel Braz de Oliveira Junior greets you with a wide smile as if he has been waiting for you since hours. He looks so happy to see you, then patiently waits as you get indecisive infront of the multiple choices of eggtarts on grandmother’s trays while a long queue; buzzing with excitement behind you, impatiently waits for their turn.  Joaquim serves your order in a dash while taking the time for small talk and then you settle on one of those modern chairs infront of a huge window. There is light, a lot of light and a lot of bustle on the busy Chaussée de Charleroi but your eyes are now locked on the four pasteis de nata you vow to finish in one sitting. Here, temptation is so huge, you order more than you can chew even if this luminous, welcoming, chic café offers you all the time to finish them and to bask in an afternoon of coziness while the huge pile of ironing had been left in one corner at home. 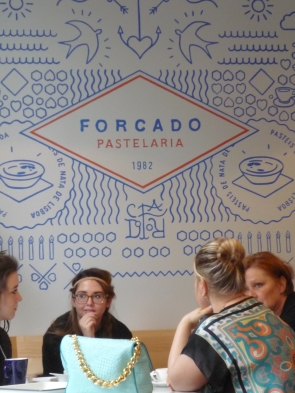 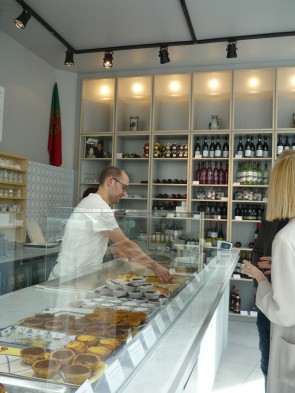 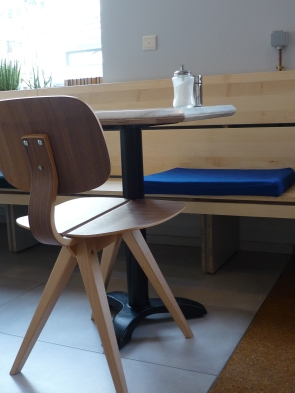 But then, I felt something was missing. So I headed off, for the nth time, to Forcado Pastelaria…

Instead of going to the cafe, I sneaked into the small atelier, which for more than ten years was also the improvised shop, more of a counter with a minuscule shelf that housed a no-sweat cash register and cake boxes. I pushed open the door…it was quiet, spic and span, and before me, rows of tiny moulds and a bowl of bubbly cream. I heard someone hollered from behind…”who’s there?” and I answered “I’m sorry, I think I made a mistake.” And then he appeared, Joaquim Fernando de Oliveira, the great Portuguese chef who whips up the best eggtarts in uptown Brussels. I asked if I can visit, explaining that its for my blog that nobody reads. With a big smile, he donned his chef’s vest before he grants me a late afternoon, unhurried chat where I discover a man full of charm, who remains passionate about his work, and so fatherly in his advice that family counts first – far from the “grouch” he was occasionally known to be when pretentious customers and their impertinence exasperate him. 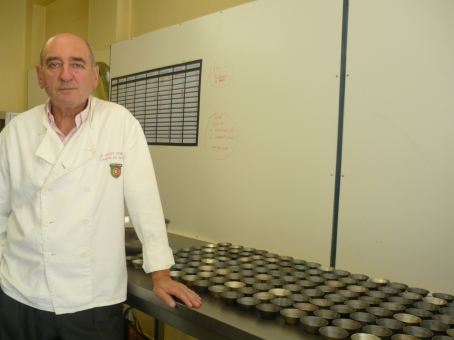 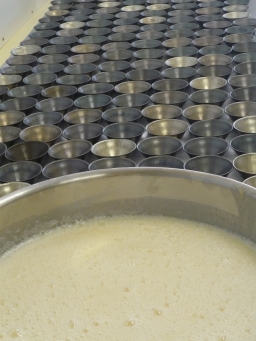 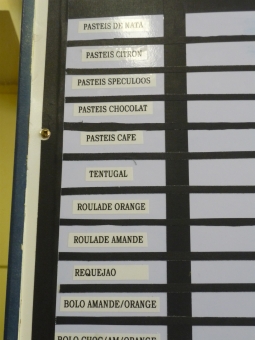 Very few people know that Forcado is a family affair that began with a chef’s life in exile. Joaquim Senior left Portugal at the height of Salazar‘s dictatorship. His father was in prison and he was scheduled for departure to a former colony, Guinée Bissau “to shoot people who did me no harm.” So at 19, he crossed the borders, found himself in Brussels,  worked in restaurants, learned on his own, rose from the ranks, and finally opened a gastronomic restaurant thirty-two years ago. The original pastry shop, which opened a few years later, was located around the corner on rue Americain, facing the imposing house of Horta, the most important edifice of art nouveau architecture.

There were glorious years; impressive notes from Gault et Millau and receiving “deux fourchettes” from Michelin….and there were difficult moments in the frenetic life of a chef. He sent all his employees away, sold his business, said goodbye to his kitchen, followed the advice of a psy to change his life. But that little fire kept burning and one day, he opened a tiny atelier beside his former restaurant, worked alone and started rolling out hundreds of pasteis de nata from a traditional, convent recipe dating back from 1843, from which he had added his “secrets.” 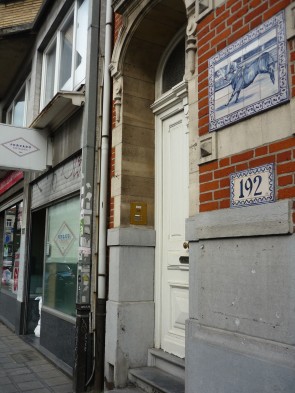 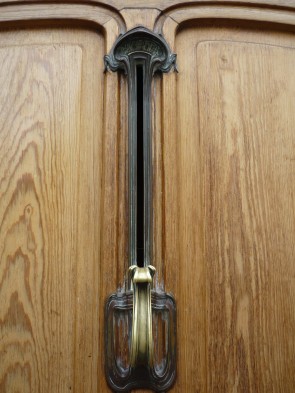 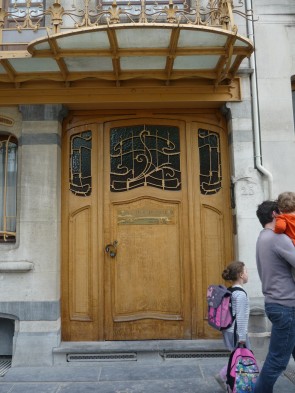 I tried to wangle bits and pieces of these “secrets” – temperature shocks that congeal the cream; high-grade margarine that is spread in puff pastry, folded and refolded by hand; a cream mixture that demands the time and patience modern pastry chefs have very little of today. But the loveliness of Joaquim’s pasteis goes beyond the recipe that yields a crunchy crust with a wobbly, smooth and creamy flan. They are simply made with love. 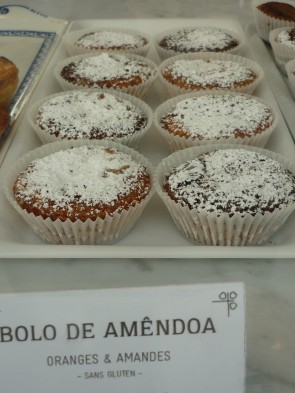 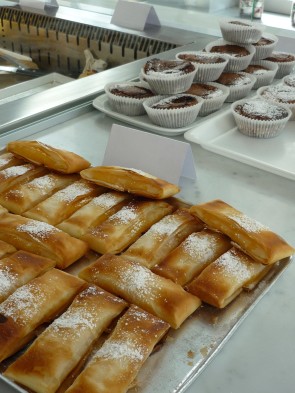 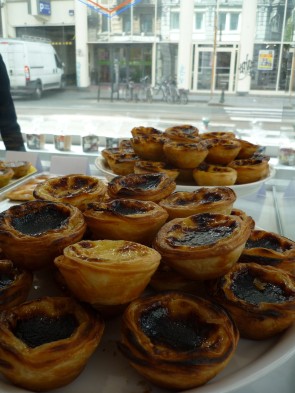 The café is Joaquim Junior’s project, with a bit of prodding from his father. He admits he is no good at the kitchen, hardly touched the oven. A masteral thesis, however, proved that he had all the ingredients for building an “empire” his father had always dreamt of reconstructing, not for him but for his only child. And while Joaquim Junior is young, ambitious, and highly motivated by family loyalty and gifted with an intuitive sense of marketing, he knows that his ace is still his father’s unparalled pasteis de nata. It has been said that Joaquim’s pasteis are soooo good and are compared favourably to the ones made in Belem, the bastion of pasteis, that they find their way back to Portugal, wrapped in boxes and taken home as precious gifts instead of Belgian chocolates.

Except for the grand array of pasteis….the classic, chocolate, speculoos, lemon, almonds, orange, mojito, porto, muscat, and other delicacies like the Tentugal and the Orange or Almond rolls, and snatches of customer conversations in Portuguese, there is not much to tell you that Forcado is your portuguese café. Joaquim Junior, who I now baptize as JJ for easier reading, refused any clichés that would have made it a “popular” café but instead have opted for neutral and modern tones, only allusions to azulejos in the logo, a collection of heirloom plates on a wall, the cork flooring (Portugal produces half of the world’s commercial cork)….and yet, JJ couldn’t do away with having a Portuguese flag at the counter nor ignore the rambling tramway upfront that reminds us of the city of Lisbon. 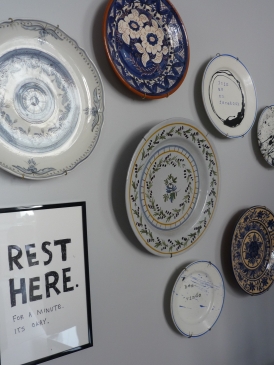 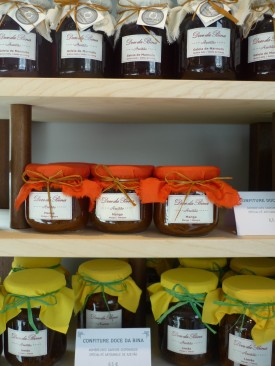 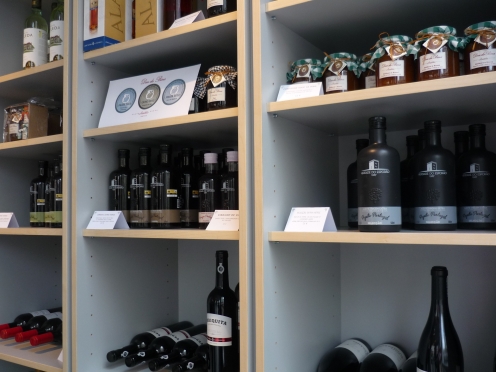 In a few weeks, Joaquim Senior will leave his two-room atelier….for a bigger one; the irony of a semi-retirement that will allow him to make his dream cakes, recipes that he had gathered, invented, re-invented but never had the time, the space nor the equipment to realize creations such as the multi-layer and alcohol-soaked “Obama” or “King Philip.”

Back in the café, the eggtarts were gleaming on our marble tabletop. It was time to savor and to share and the stories have wandered from the father and son exploits to my daughter’s philosophy class on Jean-Paul Sartre and his advocacy for constant change. “My teacher said that Sartre thinks one should never be contented with oneself, that we should always strive to be better and not to be afraid to embrace change. And I told him, my mother is like that,” my 18-year old daughter glowed as she recounted. My pride was brimming like the pasteis’ toasted tops and as we devoured the four classic eggtarts, I thanked Sartre and the Joaquims for reminding me that I am the sole “meaning maker” of my life. Now, this could still be in the world of pastry but will probably never compete with a chef, who one day braved the borders to bake Brussels’ best eggtarts. 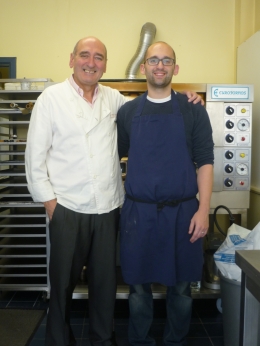 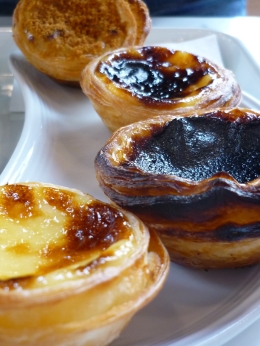 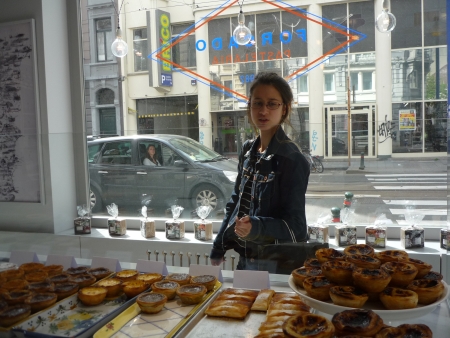 3 thoughts on “Sartre and the Egg Tarts”