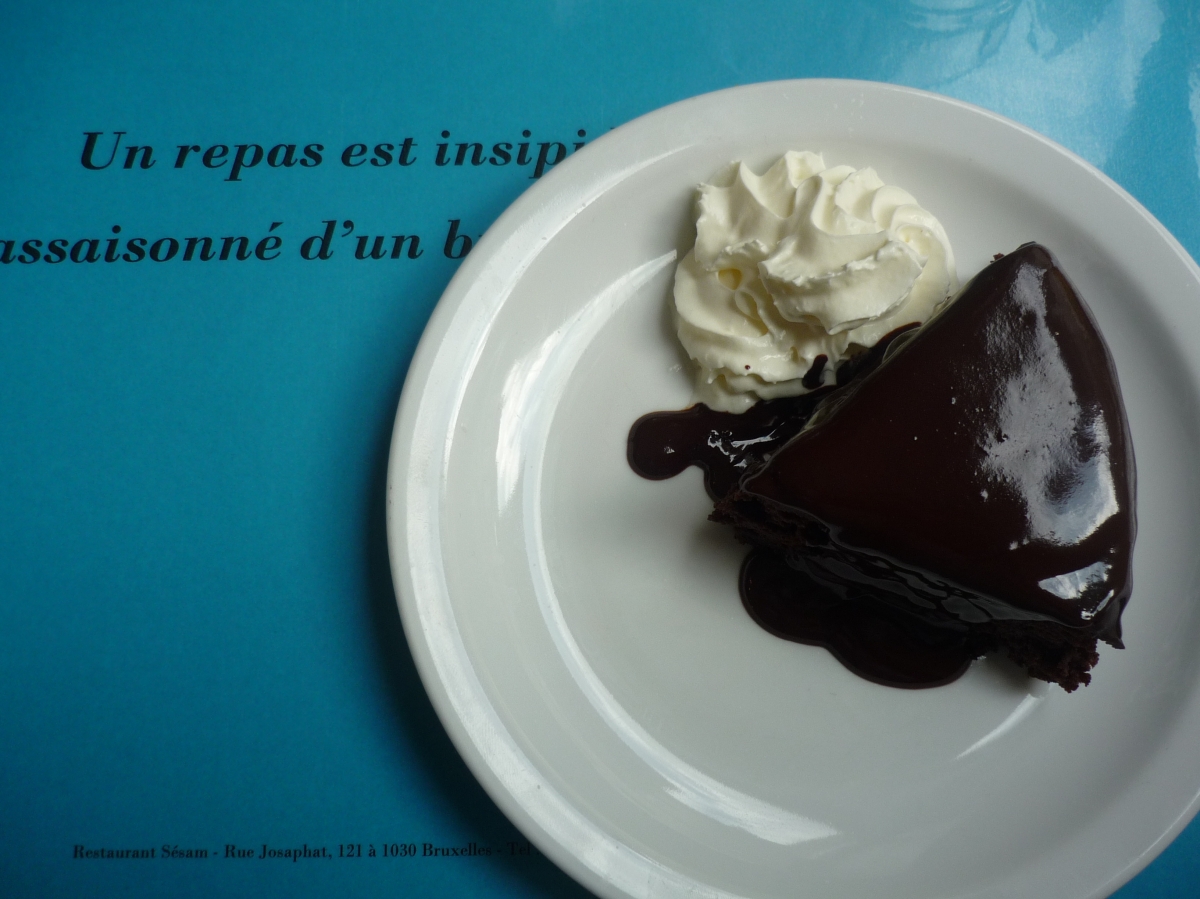 On a Thursday night, a balmy one heralding the start of spring, we walked into a former fishmonger’s shop near Brussels’ north train station. White tiles lined the high walls and deep, stainless steel tubs lay empty infront of the windows. A group of men in mismatched outfits, long hair, smoking self-rolled cigarettes, has settled in old couches and wooden chairs. There was a bearded guitar player hunched infront of a series of old clothes, arranged quite neatly on a mobile hanger. And at a corner, where bicycles have been left against the walls, parked a rusty cart filled with blue vegetable crates. If you don’t know this address, you might not want to walk in. It’s dim, crowded and confused and that’s not exactly the criteria we are looking for when we go out to eat in a restaurant on the first balmy night of spring. As soon as we stepped in, we were greeted by a sign, “give what you want.”

This is the Poissonnerie, a table d’hôtes that serves free meals every Thursday evening. Marie, the white-haired lady chef, gives orders and instructions in a very motherly way to a group of happy, smiling male kitchen assistants, tenants of this address that houses people who cannot afford rent. They are our hosts for tonight’s table. The two floors of this abandoned building have been converted into social lodgings where the space is free and each “community member” shares the costs of the utilities and helps maintain the place clean and in good order. Let’s call it “official squatting.”

The doors opened just before eight but soup was served an hour later. That gave us time to hang around infront of an improvised bar to get organic and artisanal beers, then took a few steps down to a room decorated in recycle art and finally found a table near a burning wood stove.

The leeks soup was thick and delicious, accompanied by a wide choice of breads. The first ones on the line had them in bowls, the rest had them in cups of different sizes. This was followed by a puree of potatoes and celeriac; a red sauce of black olives, tomatoes, lentilles and onions; and a very garlicky green and tomato salad. Those who marched into the kitchen first, had their meals served on plates. The last ones received them in bowls. There is no service to speak of but rather, we should speak about how Marie and her cooks spent the whole afternoon peeling the best potatoes, removing the dying leaves of a salad, removing the brownish skin of a celeriac, and finally scooping the purees from casseroles onto some 50 plates that evening.  Every now and then, we hear the  tinkling sound of coins being dropped in the donation box. 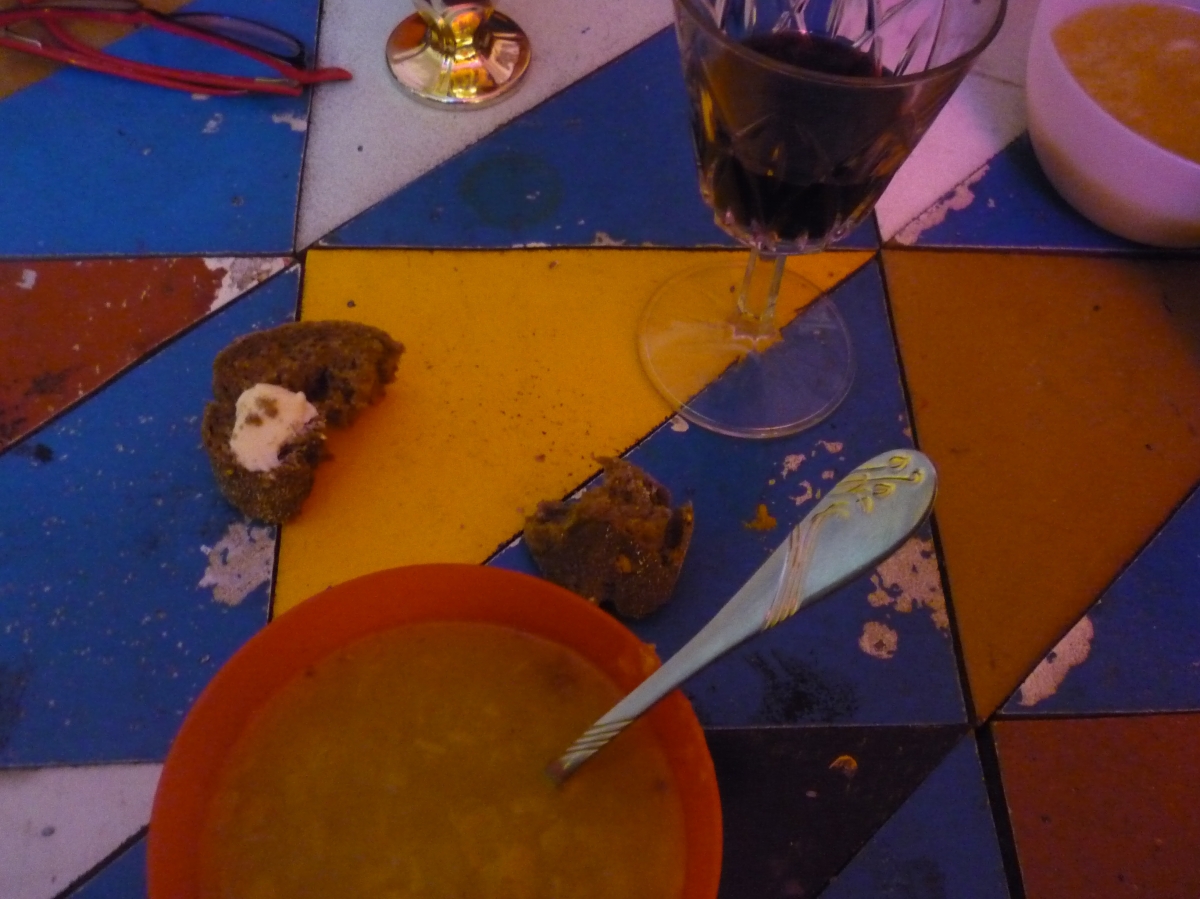 We ate in silence until my seatmate said “we know that this was all made with love.” Love and the unsold vegetables of the morning market are the ingredients of this weekly meal. The “Poissonnerie” prepares the meal with vegetables from wholesalers who are ready to throw them away  because of bruises, dried outer leaves, imperfect shapes, dark spots – everything that makes a normal consumer ignore what is still consumable. Poissonnerie’s battlecry is  “sharing, partaking, saying no to food waste, promoting healthy food.” It relies on a community of participation. Two of the young volunteers who were sitting beside us woke up at four in the morning to collect the vegetables and dragged the cart that must have weighed more than 30 kilos. Many came for a “free” meal but most of them wanted to be part of this strange project in a strange venue where hipsters and the homeless mix, where you wash your own plate in a plastic pail brimming with soapy water, and where one can enjoy the jam session that spontaneously rise after the meal. It’s unimaginable that you walk out of there without dropping some coins or bills, knowing that this community would need some funds to buy oil, vinegar, salt, spices, washing liquid and all the rest that any kitchen needs. But then, you can also walk in with donations of plates and casseroles, used clothes and books that anyone can pick up for free, or logs to feed the stove so guests are kept warm while dining in a room with doors leading to the now empty cold chambers. (Poissonnerie, 214 rue du progres, 1030 Schaerbeek)

Sésam’ opened its doors a few years ago to help people in difficulty. Whether it’s to provide an income for those in precarious situations or train people for a professional reconversion or welcome juvenile delinquents who have been required by law to render service to society, Sésam’ has succeeded in meeting its social objectives by running a restaurant that serves very good food at small prices. 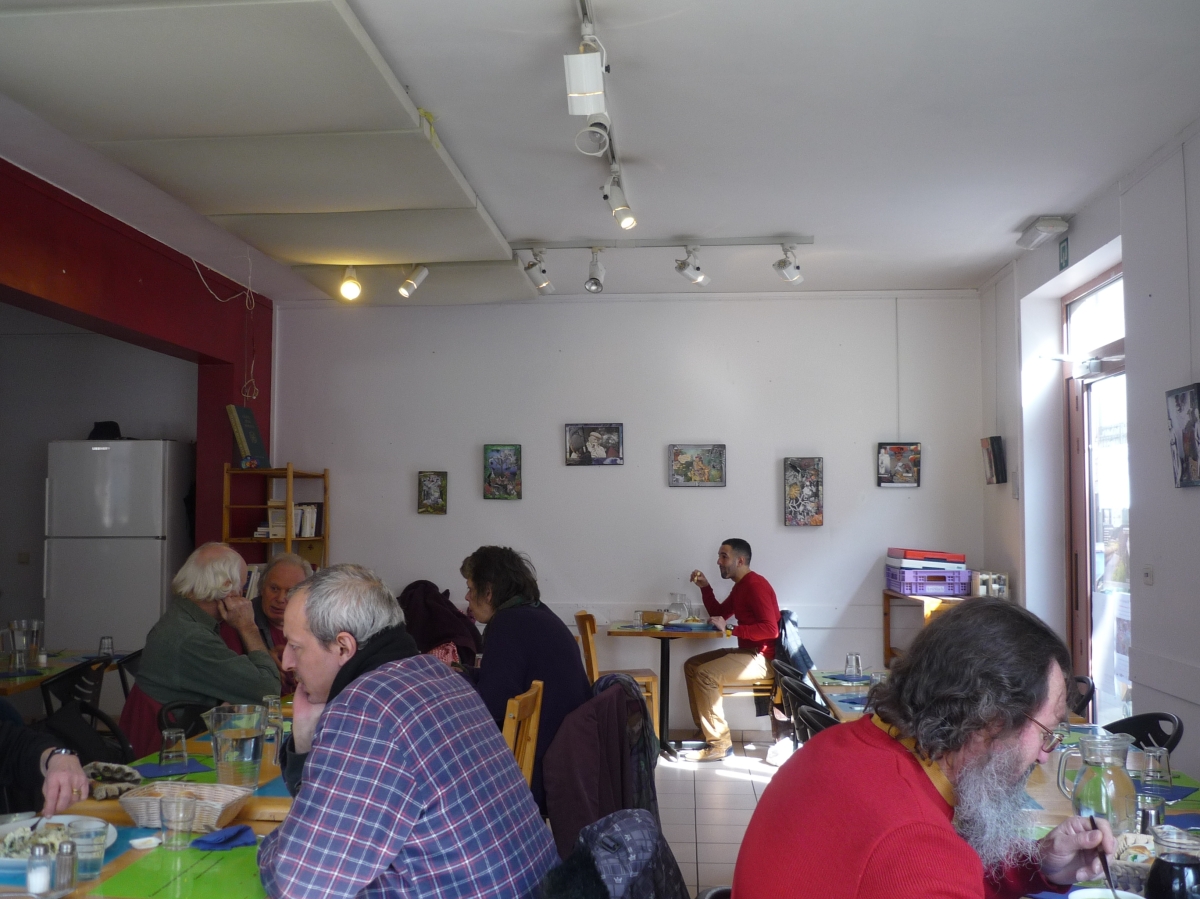 Isabelle, who manages Sésam’ and trains a personnel of all ages, was all smiles when we complimented her with the quality of the food and the service. She looked completely at ease, relaxed as she hopped from one table to the next, getting into small conversations with regular clients while concealing a firmness that have given this social restaurant a reputation of good standing. She also took time to show us an ongoing exhibit of a local artist, one of the many who chose this venue for exhibitions.  Sésam plays host to seniors craft workshops, art afternoons for children and sewing courses for adults. Open for lunch from Mondays to Fridays, students of a nearby university, the elderly of the neighbourhood and those who work in the area come for traditional Belgian dishes like the Flemish beef stew and to discover some exotic recipes from Morroco, Turkey or Armenia. This is in Schaerbeek, one of the cities  in Brussels where a big population of migrants have settled and stayed. Most of the food shops on the street sell flat breads, halal lamb sausages, couscous and lemon confits. But Sésam’ is the place where all cultures meet, that is why it’s also called the “Bouillon de Culture” (the breeding ground of cultures). 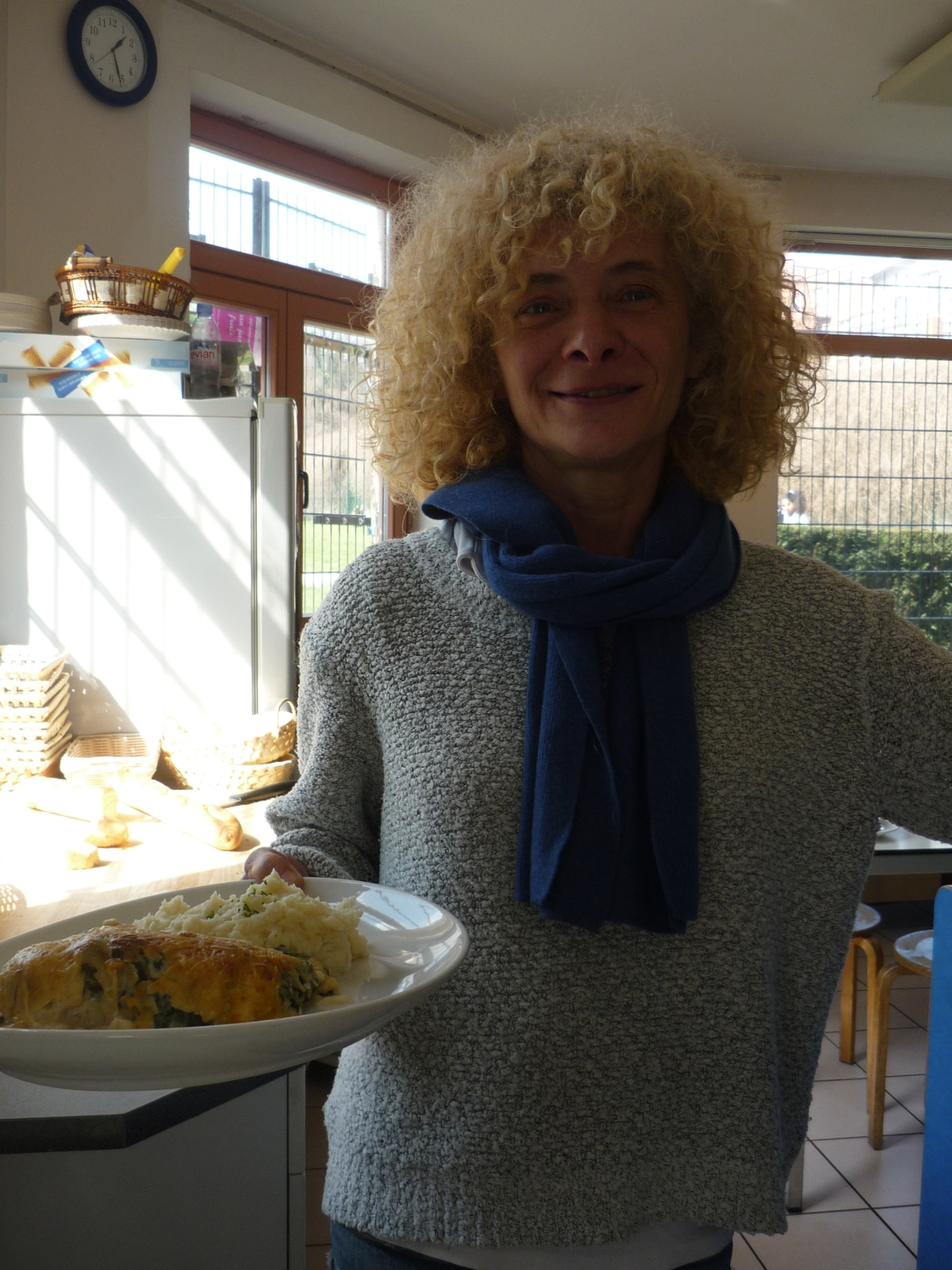 The day I went with a friend, the day’s menu for 7.50 euros was leeks soup and gratin of sea bass and spinach, topped with grated cheese. I skipped the leeks soup and exchanged it for a coffee with a homemade, moist chocolate cake served by a young, shy man who is on some sort of internship. For two euros, I could have asked for a second slice but reason and guilt took over, so instead I took a copy of the week’s menu to schedule another day of a healthy lunch with a conscience. (121 rue josaphat, 1030 Schaerbeek)

The last time I ate there was in summer. It was a Sunday and since this has become a destination of families on weekends, the Estaminet of La Ferme Nos Pilifs was full. All seats were taken in the terrace. In a country where the sun rarely come and stay, any day with a ray of sunshine would have people rushing out for a sunbath in the guise of a happy hour in the terrace. Finally settled near the bar, we placed our order of coffee and crepes on a small paper, legibly marked our table number and waited. The wait was a bit too long but we didn’t mind. We are being served by the best waiters in town, people who have shown us that intellectual disabilities must never be a barrier to social integration. 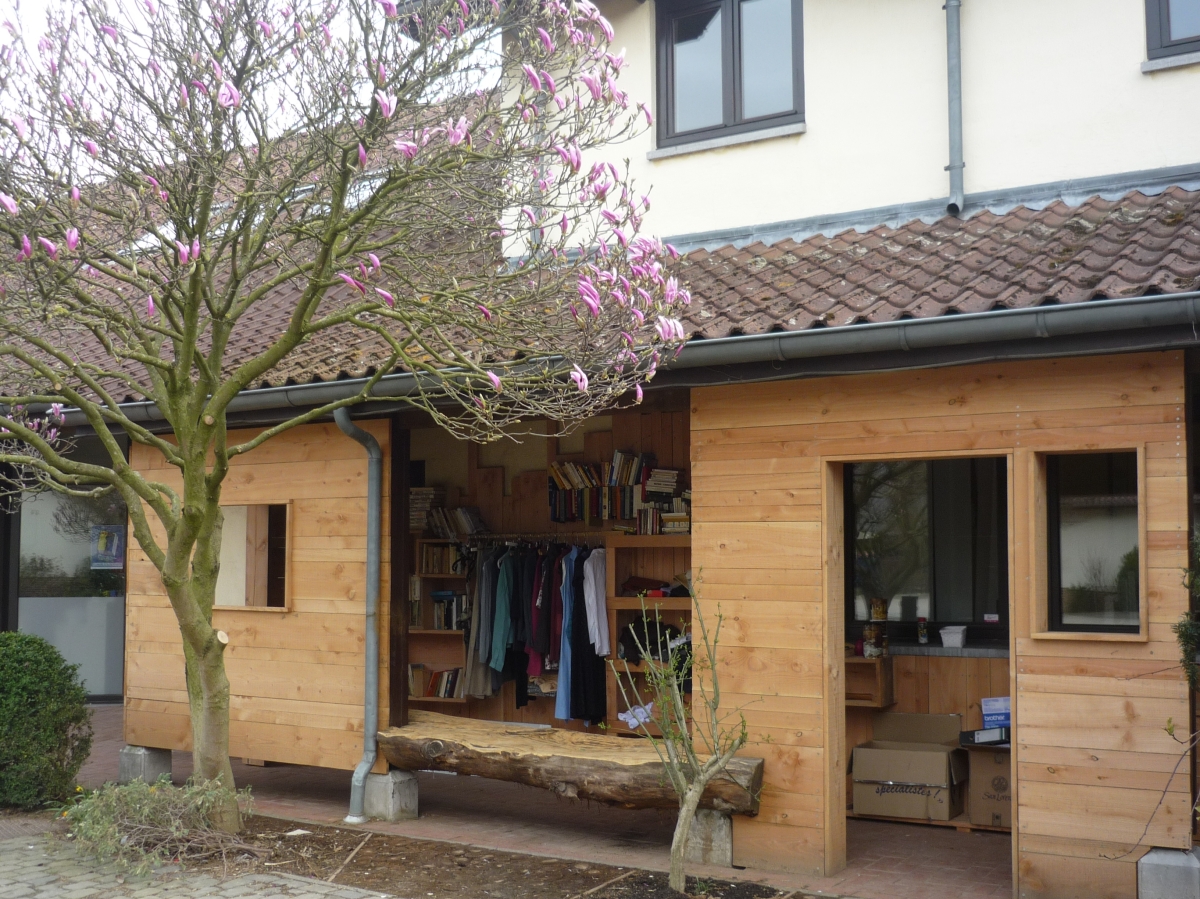 La Ferme Nos Pilifs, spread over 12 acres, is  a sheltered workplace which “provides meaningful, fulfilling, and rewarding work to anyone with a disability.” What they did was to identify chores that are adapted to the employee’s abilities rather than on his disability. Over a hundred workers with disabilities work at the farm;  from baking, handling the bar, acting as the cashier, maintaining the kitchen gardens and poultry, to providing mail services for businesses.

We come here to buy trees, houseplants, gardening tools, seeds…or organic cabbages, fairtrade chocolates, vegan sauces. But there’s a spot that invites us to share our old clothes or books, bring bottle caps and wine corks for recycling, learn the art of cooking with low temperatures.

The farm boasts of a profitable garden center, an organic bakery and grocery, and a restaurant that serves a daily special, a veggie-Thursday, and Saturday brunches. While my husband went to look for an old variety of pear tree to plant in the garden and check out some egg-laying chickens, I rushed to the bakery. I bought two loaves of bread, croissants, and a cream and almond filled buns.

Back home, I spread a thick layer of boursin cheese on a slice of bread with grains and poppy seeds, took another slice and smeared it with butter and raspberry jam, took a third one….just couldn’t get enough of this cake-like bread, that most likely, have been baked with love. (La Ferme Nos Pilifs, Trassersweg 347 – 1120 Bruxelles)