The backroom was dark and intimate. There were two small tables, each surrounded by three deep brown leather seats that have stories of their own. There was only one lamp that made reading the writing on the wall a bit difficult. It was just about four in the afternoon and there was a lady wearing a pair of beige vintage ankle boots with buttons secured by cream elastics, sitting quietly on the sofa facing the open door.

I took a round wooden table opposite her, but in the other room, just beside the counter and the tea display. She seemed to be enjoying her solitude, listening to jazz music while enjoying a cup of tea. It would have been impolite to impose my presence in the backroom, where it’s cosy if you’re alone but too crowded if you are two.

This is the magical nook in the tea shop, Comptoir de Florian in Ixelles, Brussels, the place one would choose for a confession, a forbidden rendezvous, or an afternoon retreat from a day that had gone awry. At past the hour of four, the regular clientele start to pour in, hoping to find the best seat, but a minute too late, have to grumbly accept the second best tables of the house. 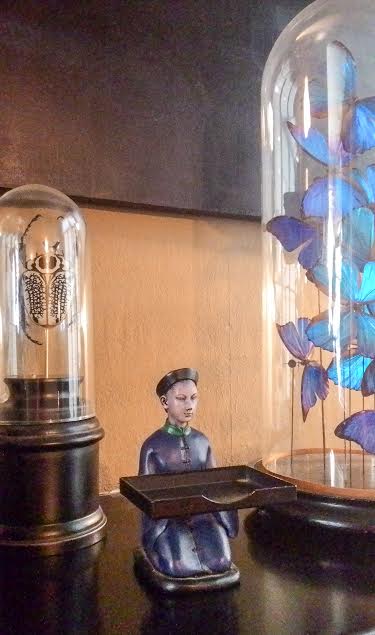 I was just curious. Comptoir de Florian, it seems, is one of the best tea shops in Brussels. It has history, an impressive collection of tea, and wonderful cakes. On my first visit, I chose Hermes, an infusion of lavender, thyme, lemongrass, sage,  verbena, and chamomile; and since I decided this was spice day, I paired it with a slice of a tart made of orange, almonds, ginger and cinammon.

I returned a week later with a friend, with whom a chat with, turns into a session of ventilation of our feminist struggles and maternal worries. My head kept spinning that day, a light attack of vertigo, that I couldn’t remember the name of my tea, something that sounded like “a girl from ipanema.” It was so good and girly, a fusion of white and green tea, punctuated with roses, peonies and tea flowers. And since they didn’t have a rose-flavoured cake, I chose chantilly cream and apple pie, in that order. If the cakes were moist and sweet, the service, unfortunately, was dry and sour; and though a warm welcome is the strictest criterion for a tea shop, I just chose to ignore the lack of it and instead enjoy my tea and limit my interaction with my hosts to the strictest minimum. 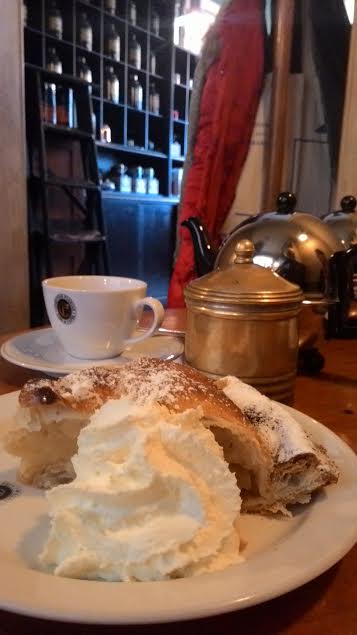 I can understand why the backroom is so sought after. Where we were seating, our conversations mingled with neighbouring tables, the acoustics of preparing the orders in the adjoining counter, and the visits of customers wanting their favourite teas. Not that it was bothersome…just less comfy than the backroom, where the promise of an hour’s rupture from the daily grind is guaranteed.

On the day I came for the first time, when a couple arrived to “inhabit” the tiny chamber, the lady with the vintage ankle boots, stood up and headed towards the counter to settle the bill. In the light, her outfit was flawless, a brown, felt hat worn slightly sideways and a flowing, deep blue rayon dress that fondled the round wooden tables in the front room as she passed by. For a moment, I thought I was having tea with Agatha Christie in some English living room in the twenties. A fleeting vision that Miss Christie would have comforted me with “The impossible could not have happened, therefore the impossible must be possible in spite of appearances.” (Murder on the Orient Express)