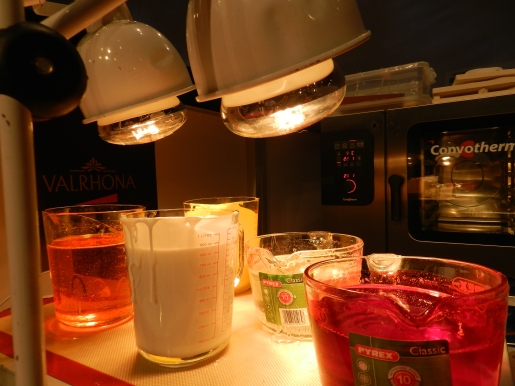 Here I was in Lyon, France – one of the world’s gastronomic capitals and yet, have been eating fastfood, greasy hamburgers for the last two days. I didn’t get a chance to eat in one of Paul Bocuse’s brasseries, the very least I could have done since I couldn’t afford a classical menu in his Restaurant Abbey Le Collonges.  If I had taken wine with that dinner,  I would have reprimanded myself anyway for a peacocky meal instead of paying for a nice holiday in another country’s food basket, like Bologna in Italy. I was surrounded by “food of the gods” and got deprived of a single bite. I just didn’t have time.

No tasting of Lyonnais specialties on this trip, where I had been asked to cover, in 48 hours, a huge French food fair and the Pastry World Cup.  The saying “You cannot have your cake and eat it, too” could never have been so appropriate than in my despondent case. All I was allowed to do was to ogle and salivate….because the pastries were so near and yet so far.

This is the Pastry World Cup – the dream of every pastry chef that some ignoramuses refer to as the Miss Universe or the Formula One of pastries. How can one even compare this prestigious contest with human meat or motor oil? This is the Oscars of Pastries, where gowns are replaced with white, crisp aprons and checkered pants, with toques as accessories and double-breasted jackets simmering with gold, silver and bronze medals. And the winners…speechless and in tears.

So, now you can imagine why my frustration in the last two days have risen to the level of a sizzling volcano. I could see the multi-layered bavarois, almost licked the cream, smelled the intense aroma of melting chocolate, saw how sugar is transformed into an artwork and watched the desserts parade before a long table of international judges. And they poked, forked, chewed, moved their lips, gurgled with sparkling water after each tasting and penned the points that determined this year’s champion.  I was nervous, excited and hopeful and yet…I was just a spectator, though thanks to a press entry, I was able to watch in close range how each team fought to be the best in a marathon of 10 hours. But the reason for the extra jitters and the core of this effervescence was the presence of a Philippine team. 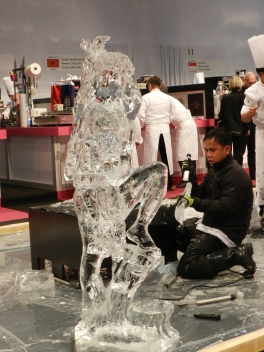 My heart went out to them. I had to stop myself from cleaning their table tops, removing scattered ice, and pulling the sugar. But no one was alllowed near them. They were the “untouchables,” oblivious to television cameras, to roaming judges, to the screaming contingent of Filipino fans. They were calm, organized and concentrated in their sweet bubble.

I felt like the special guest of Willy Wonka. I was in my planet but this is another universe. The Pastry World Cup has nothing to do with baking brownies on a Sunday. Nigella Lawson, one of my favourite chefs despite of her lapses, would have failed in the first 15 minutes. Her drooling icing, finger-licking antics that my nephew calls “culinary porn” wouldn’t have pass the first test. There is baking and there is pastry. And in between an entire world of gadgets and equipment, years of training and techniques, honed instincts on varying melting points  of chocolate and the talent of synthesizing flavours. When the budget allows it, we see an artillery of equipment from power tools for ice carving, spray guns, high-end mixers, sugar-heating ceramic lamps,  blow torches, electric fans and yes, hairdryers. 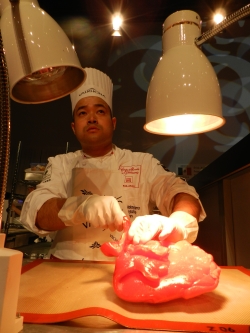 There were 21 teams, each had 3 chefs specialized in sugar, chocolate and ice. Each team had ten hours to finish three chocolate desserts, 3 frozen fruit desserts, 12 desserts on a plate, and artistic creations in sugar, ice and chocolate. Also, each country had to choose a theme:  “The Vikings” for Sweden (how original!), “The Wild West for the US” (how surprising!), “The Wild West for Algeria” (even more surprising!), “Star Wars” for Denmark (that was a darth idea), “Mayan Culture” for Guatemala (love your own!), “Peter Pan” for Italy (forever kids), “Mario Brothers” for Singapore (forever kids 2), and “Cycle” for the Philippines which, like many things in the country, requires sub-titles and in this case, “the hunter and the hunted” (just because a sugar frog was eyeing a sugar dragonfly). 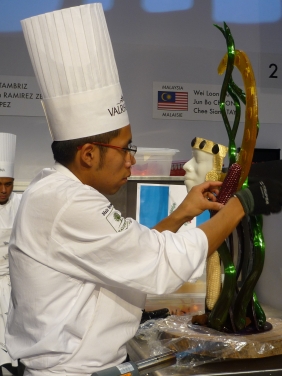 A panel of judges gave points for work organization, technique, maximum use of ingredients, timing, artistic appeal, originality of recipes, and taste. The teams received bonus points if they used special ingredients from their countries. Tropical flavours were the in-thing with yuzu as the most glamorous ingredient. But they were also judged for cleanliness and order of the atelier, punctuality and team work. It was this “oneness” that earned the Philippines their place in the top half despite of being a first-timer in such a prestigious contest. They had no airs, no diva-attitude, no quarrels of who’s the boss. It was a perfect symbiosis of a team who was determined to show the world their level of excellence, their dedication to the profession.

All the teams felt that way so there are tears when things go wrong. But no tantrums, no swearing, no fuss. The show must go on as it had to for Egypt, for example, whose two chefs were denied French visas and had to deal with “strangers” who replaced them or Italy who, seconds before bringing out their dessert plates,  broke their chocolate sculpture and messed up all the ready plates. Backstage stories were fascinating: a Guatemalian chocolate chef on a wheelchair who decided that no accident can stop her from this passionate profession; the rumored three-million euro budget for training the Danish team; and the Philippines’ Vincent Cahatol, the wood carver who converted himself into a kitchen artist with vegetable, fruit, chocolate and ice carvings. Cahatol, whose toolbox never arrived, won the best ice sculpture with a borrowed chainsaw, two chisels and an ice clamp.

After 48 hours, the verdict was: gold medals for Italy; silver for Japan and bronze for the US. Winning is so important but not as important as the lessons learned in such a contest. French master chef Quentin Bailly, the 2013 champion, said the pastry cup experience is life-changing. “Of course, you earn more credibility, it opens new doors professionally. But the pastry cup is a venue of sharing. We learn from each other’s techniques, get acquainted with new equipment, taste new ingredients coming from different countries…but most of all, we build friendships.”

I felt it…this unspoken solidarity among those who knew what it means to be there. Hardwork, perseverance, creativity, passion. At the end, it felt less of a competition. How could it be…when you hear generous compliments from each other or the shared sighs when things go wrong for one team or the unabashed expression of admiration for another’s technique.

Indeed, it’s strange this special sacharine kinship among pastry chefs. And as Gabriel Paillasson (below), founder-president of the Pastry World Cup said, “Welcome to the family of the greatest pastry chefs in the world.” 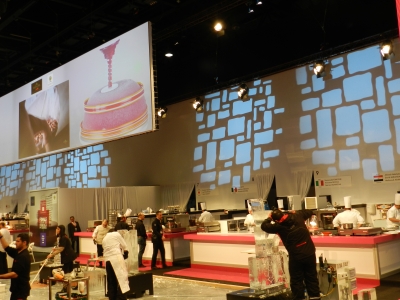