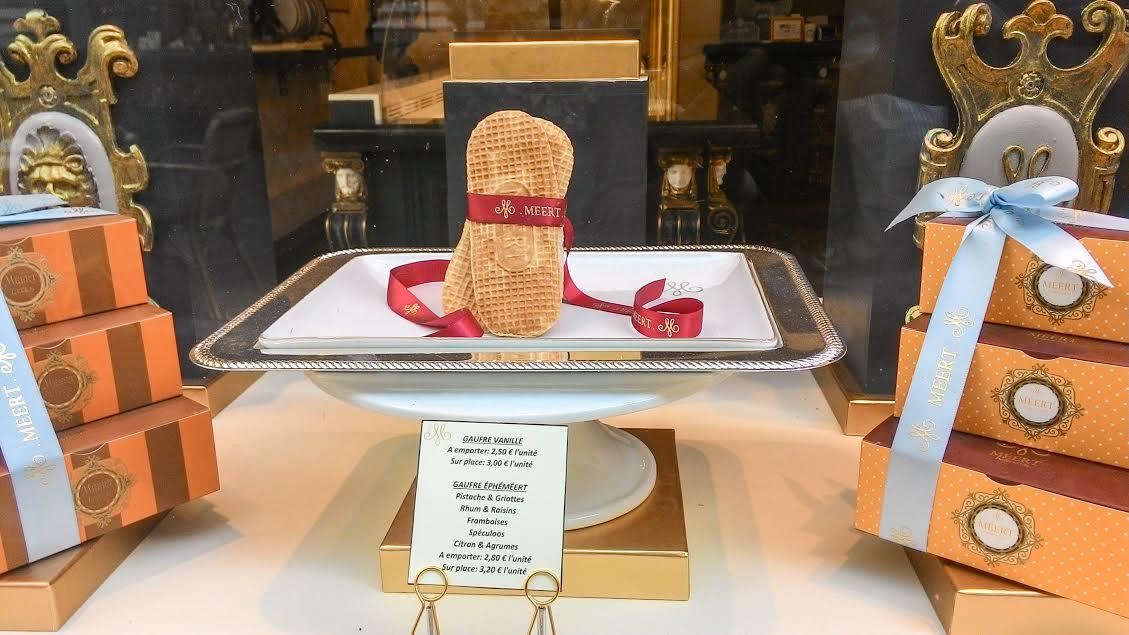 Dainty. Tempting. That’s how I would best describe it.

My daughter Simone and I stood infront of the window of the Méert Pastry and Confectionary Shop in Brussels, fascinated like five-year olds, eyes unwavering at the attractive display of sweets: vanilla waffles, pink and violet marshmallows, dark chocolates, bright coloured macarons, jewel-toned fruit chews (pâte de fruits), biscuits in a tin, nougats and caramels, candied roses and French pastries in individual domes. Our mouths watered, our resistance crumbled. We were hooked.

We walked in and found ourselves in another era, for once you step into Méert’s, it brings you back in time when old world elegance and sophistication reign, the Belle Epoque, when ladies in long gowns and feathered hats, spent their precious time in détente and good company. The place is fancy, not in a pompous way but you stay rooted where you are, fleetingly forgeting what you initially came for, and instead taking in the handpainted walls and ceiling, the mirrored alcoves, brass and gold in the counters, period lamps and the trompe d’oeil, decorative motifs that are meant to “fool the eye.” And yet, we were just getting a sampling of Meert’s signature ostentatious interior architecture, a sober version of the opulent main house at rue Esquermoise in the old part of Lille in northern France.

Flemish artist and art historian Angèle Boddaert was commissioned for the Brussels shop, drawing inspirations from the masters; architect Charles Benvignat, scultpor Théodore Huidiez and painter Charles Stalars, who altogether in 1839 made the Lillois shop a neo-byzantine palace. 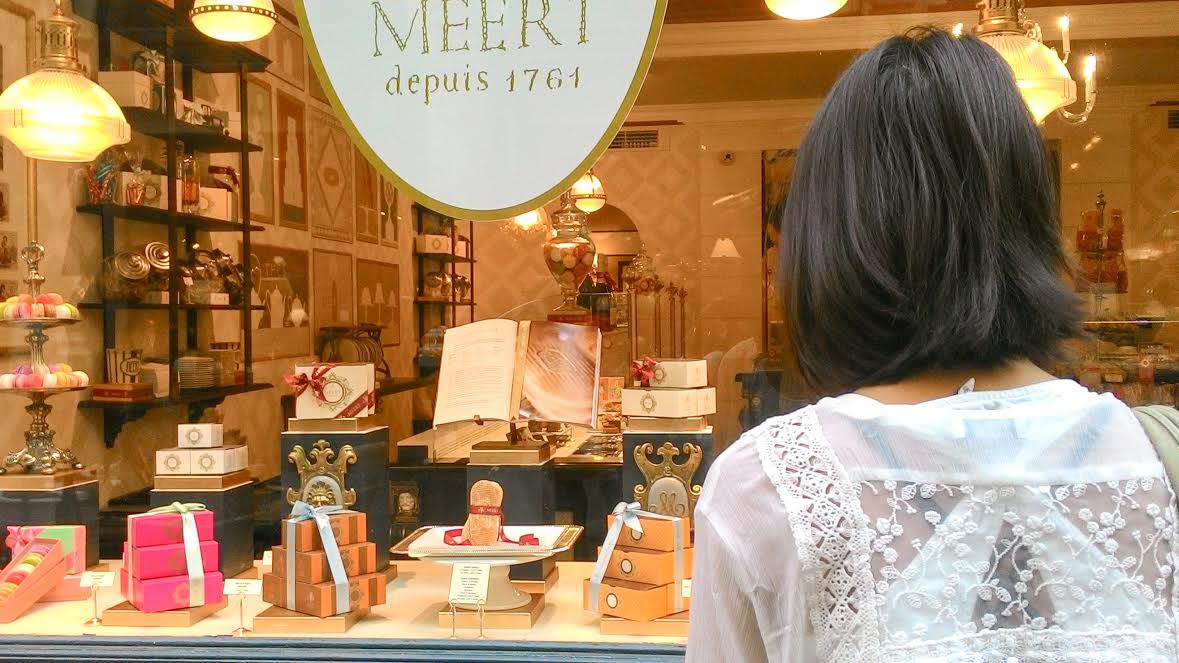 Méert’s pastry shop in Brussels is a sort of a homecoming “to embrace its Belgian origins.” After all, the man who took over the shop 157 years ago and brought the house to fame is a  Belgian from Antwerp, Michael Paulus Gislinus Méert. His sojourn in the colonies, where cocoa, sugar cane, coffee and vanilla were grown, would enriched his sweet concoctions and would spawn the famous thin waffles, filled with buttercream and vanilla. The fabulous waffles, the star product, will make Méert’s shop the most popular paradise for the sweet tooth, bringing into the shelves, onto trays and carts a large assortment of cakes, candies, chocolate and ice cream, attesting to the shop’s culinary 17th century inheritance from previous owners, chocolatier and confiseur Sir Delcourt and the ice cream chef, Modo de Rollez. 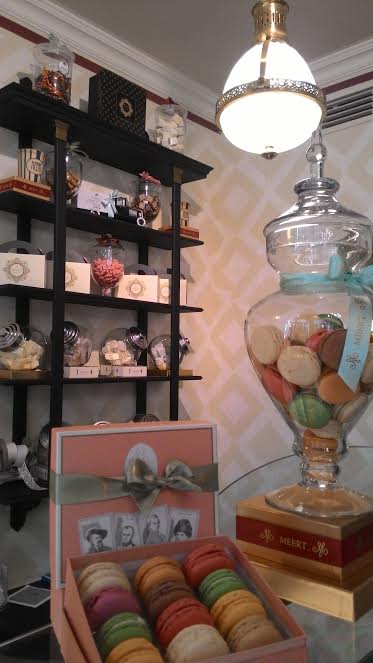 As for the Belgian store, what better place to open it than in the Galerie de Roi (the King’s  Gallery) at the Royale Galerie St. Hubert in downtown Brussels, a glass-covered passage and shopping mall built in the 1800s that now houses Belgian luxury brands and chocolate legends like Mary’s, Marcolini, Godiva, and Neuhaus, neighbours that do not seem to rattle an “outsider” whose chocolates are equally good but is set apart with its strange flat waffles, brazenly selling its own version in a country synonymous with waffles.

But I digress. We came here to satisfy cravings. Once in, you are bound to stay. Behind the store is a tea salon with walls painted in shades of plum, cream and sage; oval windows overlooking the shop, velvet chairs and marble tables the size of a handkerchief. Again, this is a mini-version of Lille’s “Family Tea Lounge.”

Méert’s waffle is not a waffle by Belgian definition. Compared to the Brussels waffle, rectangle, light and powdered with sugar or to the waffle of Liege (a city east of Belgium), heavy with sugar pearls, both big in size, Méert’s oval, thin, flat and filled waffle is considered a gaufrette. My favourite is Epheméert’s pistachio and cherry, sweet and sour at each bite with the pistachio paste coming in full flavour. You can also get them filled with violets, strawberry, or speculoos. The classic one with buttercream and vanilla from Madagascar is too sweet to my liking and might call for a cup of Lapsang Souchong Crocodile tea, a smoky  brew from the Formosa Islands, to even out the sweetness.

We were in good company, my daughter and I, so we languidly took our tea, Simone having chosen “Paul and Virginie,” a blend of Ceylan and Chinese tea with caramel, cherries, strawberry, raspberry and vanilla. Then, we ordered an egg tart and two house creations:  a pastry with a frangipane base,  fresh raspberries, a macaron, and pistachio cream; and a creamy chocolate and raspberry mousse on an almond biscuit base and decorated with a chocolate rose sprayed in red.

Gaufrettes and cakes, two silver tea pots, a porcelain jug of hot water, chocolates courtesy of the house, notebooks, phones, pens, cups and saucers, camera, silverware…these didn’t quite fit in our miniature table, so we ended up occupying the two other nearby tables, which unfortunately were tiny, too, and didn’t leave us any extra space to order the classic French pastries, delivered everyday from the atelier in Lille; the  Religieuse, puff pastry with caramel cream pastry, the Mont Blanc, mascarpone cream with chestnuts and meringue; or the Baba au Rhum, golden raisins soaked in rhum 54%, vanilla cream and whipped mascarpone.

We have made quite a mess in this dainty tea shop and totally ignored the silent dress code, coming in dusty workclothes I wore to work in the ongoing renovations of a future ice cream parlour. Fortunately, it was quiet that day. We definitely did not look like we were part of bourgeoisie but nevertheless, were accorded a warm and efficient welcome, most likely, in the same but less rigid manner they opened the doors the day General Charles de Gaulle walked in to buy French waffles invented by Belgian.